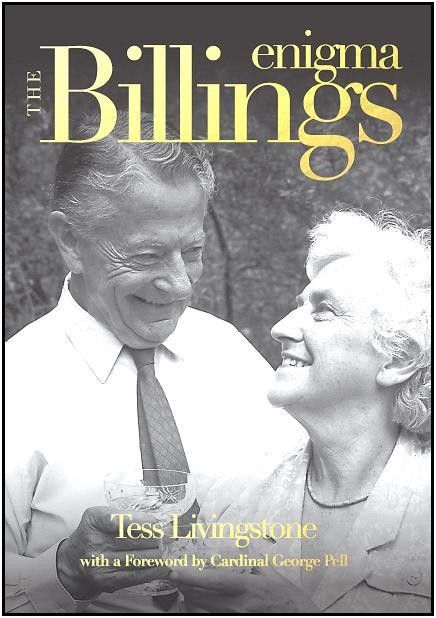 The Billings Enigma by Tess Livingstone

Newly released book on the lives, love and work of the Drs Billings.

"Remarkable story of how Divine Grace unfolds in extraordinary ways"

This dynamic book, with a Foreword by His Eminence, George Cardinal Pell, tells the story of two remarkable Melbourne doctors who developed a method of natural fertility regulation in response to the needs of Catholic families in Melbourne which subsequently achieved its greatest success in the largest Communist country in the world, China. With missionary zeal Drs John and Evelyn Billings took their Billings Ovulation Method® to the world, from the bustling slums of India to behind the Iron Curtain in the days of the Cold War, from the dust and heat of Africa to the carnival atmosphere of Brazil, travelling hundreds of thousands of air miles over more than a quarter of a century.

An essential read for those who knew the Drs Billings or have in any way benefited from their life work.