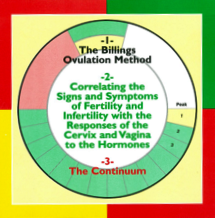 Three PowerPoint presentations suitable for presenting to large groups or for personal learning.

1. The Billings Ovulation Method®.An overview of the Billings Ovulation Method® of Natural Fertility Regulation providing an understanding of the phases of the cycle, how to chart and a demonstration of the 4 Rules. This presentation, useful for those who wish to conceive or postpone pregnancy, also gives knowledge and skills so that all women can monitor their reproductive health.

2. Correlating the Signs of Fertility & Infertility with the Responses of the Cervix & Vagina to the Hormones.

An overview of the hormonal events of the normal fertile cycle as described by the late Professor Emeritus, James B Brown as well as an understanding of the role of the cervix in regulating fertility as described by Professor Erik Odelad. As the cervix responds to the different levels of oestrogen and progesterone throughout the ovarian cycle, different types of mucus are produced, each with a specific function in regulating fertility. This presentation finishes with women's charts which demonstrate these changes, correlating the hormonal, cervical, vaginal and endometrial responses throughout the cycle.

The variants of ovarian activity from menarche to menopause, described by Professor Emeritus James B Brown, incorporate the results of his study of in excess of 850,000 hormone assays of women through all stages of reproductive life. The variants identified include anovular follicular activity where there is no LH as well as luteinized unruptured follicles; ovulation resulting in an infertile cycle due to deficient and short luteal phases as well as the fertile cycle. The Continuum is also explained in the booklet, Studies on Human Reproduction" by Professor Brown.